In late 2012 Dr. Dirk Wonnell and his brother, Chris Wonnell, established an endowment to support the Blue Ash/Montgomery Symphony Orchestra’s Young Artist competition in memory of their parents, Jack and Lucille Wonnell. Both Jack and Lucille spent their entire adult lives involved in music: teaching, giving private lessons at home, judging solo and ensemble competitions, serving as members of regional orchestras, and writing commercial musical jingles and songs for the Chicago radio market. They were married for over 50 years until Jack’s death in 2001 and Lucy’s in November, 2011. 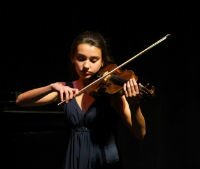 Violinist Isabella Geis, 16, was the first place winner in the Strings category with second place awarded to 16-year-old cellist Paul Schubert. The competition was so fierce in this category that three more young musicians were noted for honorable mention: cellist Matthew Shin, 17; violinist Emma Burge, 16, and violinist Spencer Sharp, 16.

Ms. Geis is a sophomore at Walnut Hills High School where she is a member of the chamber orchestra and an active cross-country runner. Isabella began studying the violin when she was 5 years old. Over the years her current teacher, Dr. Won Bin Yim, Professor Kurt Sassmannshaus, and Eija Pekkala have guided and inspired Isabella’s musical ability. At the age of 12, Isabella made her debut as a soloist with the Cincinnati Symphony Orchestra. She has performed at Universitat Mozarteum in Salzburg, Austria and as a soloist with the Seven Hills Sinfonietta and the Starling Chamber Orchestra (SCO). Last year she was a finalist in the Overture Awards at the Aronoff Center. This year she won second place in CSYO’s annual concerto competition. Friends, family, and traveling fill Isabella’s world when she is not running, practicing or participating in CSYO and other chamber groups or festivals. During the summer months, Isabella has participated in The Green Mountain Chamber Music Festival in Burlington, Vermont and the Cincinnati Young Artists Chamber Music Workshop at CCM.

Second place winner, Paul Schubert began studying cello at the age of ten. He is principal cellist of the Dayton Philharmonic Youth Orchestra and was formerly the principal of the Dayton Philharmonic Youth Strings. Paul is also a member of the DPYO string quartet. This past summer, Paul received a fellowship to participate in the National Symphony Orchestra National Trustees’ Summer Music Institute in Washington, D.C., where he performed at the Kennedy Center.

In the Keyboard category David Godar, 14, took top honors, with 16-year-old Joseph Vaz in second place. David, an eighth-grade student of Sycamore Junior High, has shown a passion for music since a child, starting piano at age three and at seven placing second in his first competition. After moving to Cincinnati, he won both district and state level Pre-College Buckeye Auditions and received Honorable Mention at the International Young Artist Piano Competition in Washington, D.C. He is a recipient of both the Cincinnati Symphony Club Scholarship and the Gino DiMario Scholarship. Last year, he made his orchestral debut with Blue Ash/Montgomery Symphony Orchestra and in the spring gave his first solo recital at All Saints Church. David will appear as soloist with the Middletown Symphony Orchestra, in January, 2014.

Aside from competitions and numerous solo performances, David participates in a chamber music program which performs at Cincinnati Children’s Hospital, as the pre-concert entertainment at Music Hall, for afterschool programs, and at retirement homes. David’s interest in music extends to the field of music theory and composition, studying with Ellen Harrison at CCM.

David was born in Vienna and lived in Boston prior to moving to Cincinnati. Currently a student of Michael Chertock, he has also studied with Victoria Mazin, Eda Shlyam and David Skvorak.

Joseph Vaz, a junior at Sycamore High School, has studied piano for eight years. A recent finalist in the Overture Awards competition in Cincinnati, and he also earned first place at the New Horizons Piano Competition and DePauw University’s Young Artists Piano Competition. In addition to piano, Joseph is the associate principal double bassist in the Cincinnati Symphony Youth Orchestra. 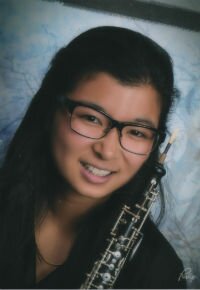 Oboist Vivian Tong, 17, was awarded first prize in the Woodwinds category. Vivian was born near the city of Guangzhou in China, raised in the Clifton neighborhood of Cincinnati, attended the Fairview German Language School and is now a senior at Walnut Hills High School. She began studying piano at age four, was introduced to the oboe when she was nine, and by thirteen had stopped piano lessons so she could concentrate exclusively on the oboe.

In the 13-and-under category 11-year-old violinist Christina Nam took first place. Christina is a sixth grader at Freedom Elementary in West Chester, Ohio. She is the youngest member of Starling Chamber Orchestra at the University of Cincinnati, College-Conservatory of Music where she studies with Prof. Kurt Sassmannshaus. 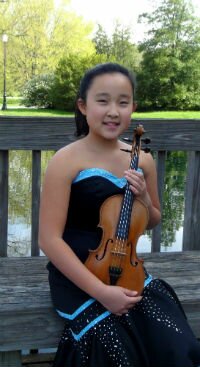 Christina is a scholarship recipient of both the Starling Project and the Cincinnati Symphony Club. In her spare time, she enjoys playing piano, reading books, biking, swimming, and especially loves doing arts and crafts.

The Blue Ash/Montgomery Symphony Orchestra begins its 2014 Concert Season with a Valentine’s Concert, on Sunday, February 23 at 7 PM at the St. Barnabas Episcopal Church, 10345 Montgomery Road in Montgomery. The concert features its own version of From the Top with three winners of the 2013 Jack and Lucille Wonnell Memorial Young Artist Concerto Competition – violinists Isabella Geis and Christina Nam, plus oboist Vivian Tong. Suzanne Bona, host of Sunday Baroque, heard on WGUC will serve as emcee. Cellist Ben Fryxell, a winner of the 2012 competition and now a student at Julliard, will perform in the world premiere of a new composition by Frank Proto.

Residents of Blue Ash, Montgomery and surrounding communities are encouraged to support the Orchestra through membership in the Friends of the Symphony or the Symphony Guild, which promotes cultural and educational projects and plans social and fund raising events. The Orchestra is grateful for the support of ArtsWave, the Ohio Arts Council, the Montgomery Arts Commission and the Cities of Blue Ash and Montgomery.