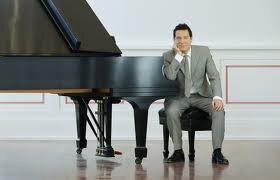 Michael Feinstein to speak and perform on April 9 & 10 as a part of the Montgomery Woman’s Club Town Hall Lecture Series.

So what do the Titanic, NPR, cartoons, and the Great American Songbook have in common? They are all part of the 51st season of the popular, long-running Town Hall Lecture Series sponsored by the Montgomery Woman’s Club.  Wednesday and Thursday morning lectures at 11:00 a.m. take place at Montgomery Assembly of God, 7950 Pfeiffer Road,  in Montgomery; Wednesday evening lectures start at 8:00 p.m. at Sycamore Junior High School Auditorium, 5757 Cooper Road in Montgomery. For more information and to order tickets, call the ticket line at (51) 684-1632 or order online at www.montgomerywomansclub.org.

An accomplished deep-sea explorer, Dr. Robert Ballard is perhaps best known for his discoveries of the Titanic and Bismarck shipwrecks as well as the natural wonders of hydrothermal vents. He has conducted over 120 deep sea explorations using the latest in exploration technology and he is a pioneer in the use of deep-diving submarines.  Most recently, he explored the Black, Aegean, and Mediterranean Seas onboard the E/V Nautilus, mapping the geological, biological, archaeological, and chemical aspects of those regions to depths of about 2000 meters. During the expedition, he posted his discoveries live on the web via tele-presence technology, putting the unexplored ocean directly in his viewers’ hands.

Mara Liasson can be heard regularly on National Public Radio (WVXU locally), providing political commentary on the award-winning news magazines “All Things Considered” and “Morning Edition”. As the national political correspondent for NPR, Liasson has provided key coverage of the candidates and issues in five presidential, and many more congressional, races.  Prior to her current assignment, Liasson was NPR’s White House correspondent for all eight years of the Clinton administration.  Liasson is a graduate of Brown University, where she earned a bachelor’s degree in American History. She received the White House Correspondents Association’s Merriman Smith Award for daily news coverage in 1994, 1995, and 1997.

John McPherson’s cartoons are fresh, fun, hilarious, intelligent and above all they hit too close to home! He is the creator of the comic panel “Close to Home” which appears in over 700 papers around the globe.  A talented speaker and presenter, McPherson loves to talk about his life as a cartoonist and where he finds his humor.  His presentations are extremely funny, informative, and engaging with a great deal of audience participation.  In 2004, McPherson was awarded a lifetime achievement award by his alma mater, Bucknell University.  He has published numerous collections of his cartoons as well as page-a-day calendars and has illustrated several books.

Get ready to tap your toes and sing along as the “Ambassador of Song” joins us for a morning/evening of great music to wrap up our 51st season. Mr. Feinstein’s international popularity is built around his graceful and moving interpretations of popular standards by Cole Porter, Irving Berlin, Jerome Kern and Ira Gershwin among others. Passionate about preserving the Great American Classics for future generations, he has produced ‘”Michael Feinstein’s American Songbook” specials on PBS which, for the past three years, have highlighted various forms of music popular through the ages: show tunes, jazz, big bands, movie musicals and more.

Montgomery Woman’s Club Town Hall Lecture Series is one of the longest running lecture series in the Greater Cincinnati/Tri-State area. Money generated by the series goes to fund arts and cultural programming in the Sycamore Community Schools and scholarships for young people and women. The Montgomery Woman’s Club was organized in 1952, dedicated to community service and building community. MWC, Inc. is a non-sectarian, non-partisian, 501(C)3 organization supporting education, advocating for women in education and health care and promoting awareness of domestic violence issues.